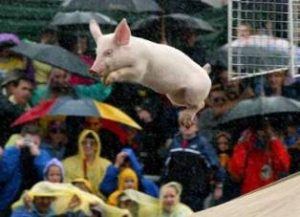 With a general election looming Hilary Benn gets up at the Oxford Farming conference to tell everyone, what a great bunch farmers are and how his ‘Food 2030’ is going to change food supply in Britain in the next 2o years. His 3 point strategy is.

All 3, very laudable, only one catch, they come at a cost and as the big supermarkets supply 80% of the food in this country, it is unlikely they will pay up. Sadly nothing much is likely to happen until someone puts some money on the table, it certainly wont be the Government, they are not going to have any money. Track record of the big 4 supermarkets is not that good at coming up with the money, as we all stumble along with 25p per litre for our milk. There is now some effort being made by Government to deal with supermarket power, probably too little too late, it is interesting to watch Tesco throw its toys out of the pram, so may be the tide will turn. But then pigs might also fly.