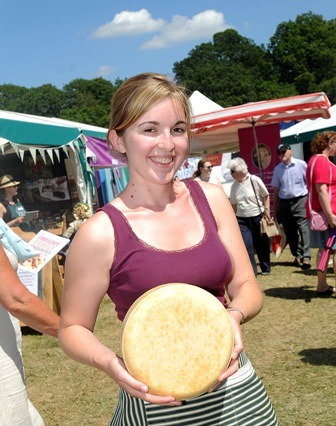 New Forest Show now over. We were given the dubious privilege of judging the ‘Young Sheep Handlers’ class. These are the future sheep farmers of Britain,15 of them, the next generation, a Class of 6-11 year olds. There were children leading sheep, sheep leading children, and both sheep and children totally out of control. There were sheep, who would not bat an eye lid, and sheep that spent most of the time in orbit. A hugely difficult task as everything was on the move, and nothing standing still. As a Welsh Mountain headed for the gate, a young boy called Jake flung himself across the ring and did a rugby tackle, this boy will go far, he knows how to hang on, if you are to become a sheep farmer in Britain, you need to know how to hang on!! This is not quite the way to handle a sheep, but we placed him for sheer determination and commitment.

And hanging on to the cheese, is a picture of Magali, our student from France doing placement with us for 3 months.