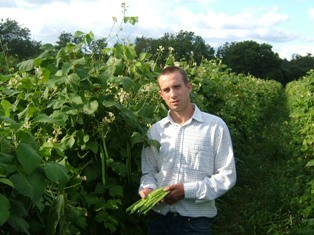 The phone goes, it goes all the time, and my Agricultural bank manger, rings to see how I am. This does not happen very often, there has to a be a catch, and there was, he was phoning to tell me that we had a new man in charge of our bank account. Given that our agricultural mangers generally hail from somewhere reasonably local, I was a little surprised to hear the new man was based in Birmingham. Then the following week we got a letter to tell us that HSBC were closing our Romsey branch, and our account was being transferred to Southampton, some relief that it was not Birmingham. This was followed by some lame excuses about people don’t use banks any longer, only computers. In ten years time HSBC will only have one bank left, and it will probably be in Birmingham! Eventually we will all keep our money under the mattress, because Birmingham is a heck of a long way to go each week.

Jono and Runner beans, and a great crop of runner beans.