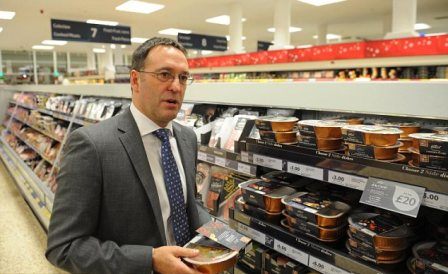 A tale of two meals.
This is a man shopping in a very well known store. He tells us he only eats the ‘Finest’ range of ready meal, clearly a bit shocked to hear that there are people who have to eat the ‘Less Finest’ range.

Then a meal made with local ingredients, what are you eating tonight.

Last week I was lucky enough to be be invited to the City Food Lecture, in London. The speaker was Richard Evans, President of Pepsi Co, the title of his address was ‘The responsibility of the food industry for improving the nation’s health’.
Pepsi is a big world operator, the principal brands being Pepsi, Walkers, Quaker, and Tropicana, and this and other huge companies stand in the dock accused of drip feeding fats and sugars into the general populace who are themselves becoming obese.
Mr Evans towed the company line by telling us that large quantities of non sugar Pepsi are sold, and packets of Walkers crisps have substantially less fat than they ever used to, probably, partly because there are less crisps in the packet, but we won’t go there for
the moment.
Margaret Mountford, chaired the panel. Steve Rowe from M&S, was wishy washy, Authur Potts Dawson may be a great chef, but found it hard, so it was left to Susan Jebb, Professor of Nutrition Oxford University to instil a little bit of life into the debate by hitting the nail fairly and squarely on the head. Wound up by a question from the floor, she made an impassioned plea to all those listening, to understand, that obesity is a huge issue, and the train coming down the track is, diabetes, causing blindness, kidney failure, stroke, and also resulting in amputation. The NHS, is struggling now, the problems facing it in the years to come are enormous.
Where does Government fit in, you have to ask, no one had the answer, sadly, but it was so clear.
Corporate responsibility will always be to the shareholder and not the obese, so we have to start at the other end. To cut a long story short, schools have to spend more time educating their charges with the ability to create and cook for themselves, rather than opening another mucky corporate ‘Ready meal’. Then getting more exercise into these children, that now sit for hours glued to one screen or another.
What is more important?
Knowing how many wives Henry 8th had and knowing their names or growing up fit and healthy.
‘Get off the track, the train is coming’. 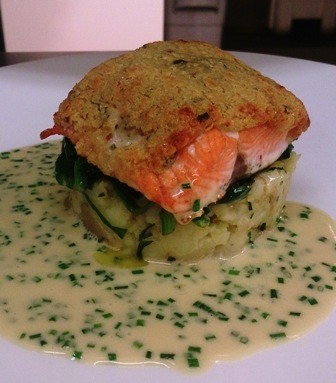 So later, in the week I drive down the road from Park Gate, travelling west, at the bottom of the hill, having gently cruised past a mobil speed camera, you arrive at the Swanwick boat yard and the river Hamble. It never seems to amaze me at the huge number of boats, yachts and cruisers all moored in and around the area. This was an opportunity to drop in, and see Gareth head chef, at the Navigator, an Upham pub. I have worked with Gareth for some time now, he regularly uses Hampshire produce and Lyburn Cheese. Featured left is Gareth’s latest creation, Lyburn Garlic & nettle crusted Hampshire chalk stream trout, crushed new potatoes, wilted spinach, chive cream sauce.
For the crust, 250g butter, 250g bread crumbs & 200g of grated cheese. Beat butter until white, add cheese & bread crumbs mix well then roll out to 1cm thick in between two sheets of parchment paper. Set in the fridge, then cut to size place on top of the fish, bake in the oven 185-90 until golden brown, when the cheese mix is brown the fish is cooked! Simple really.