Having just spent 3 days at the San Francisco food show, things have clearly moved on since the last time we were there 10 years ago. The quality of the artisan homestead cheese has moved on, there was a lot of good quality cheese on offer, and it was good to see and meet a number of dairy farmers like ourselves who now make cheese with their own cows milk. For us it was good to meet our customer base in the US. They are an important part of achieving a diverse and interesting customer, that has a passion for their job and their business. Looking at the two pictures below, on the left we have the British cheeses, beautifully presented and the right we have the importer of Dutch cheese. The branding on the right hand side is so pronounced and such a key part of the marketing, the British cheese can be the best in the world, but branding is just as important. You might not like the bright colours, but they do stand out from the crowd. 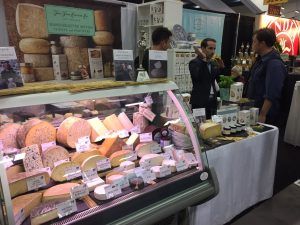 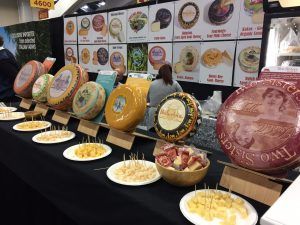 Inevitably, there was discussion regarding Mr Trump, best described by one US citizen, as Americas big experiment. To which I replied, we have also chosen, like it or not to get involved in a big experiment of our own, called Brexit. Only time will tell, and time, will be the judge of these two decisions but the jury is going to be out for some time. We do know who is in charge in the US, in the UK there is some doubt. There are some hard Brexiters getting carried away with their own importance. Britain may have opted to leave the EU but I am not sure Britain voted for a hard Brexit and a hard border with Ireland, there is the possibility that the politicians could make a mess of this.