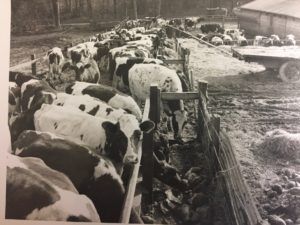 In the sixties they were Ayrshires, in the background a Nuffield with the slurry tanker.

Its time for a new milking parlour, the one we have at the moment is falling to pieces, it is 50 years old and has been used twice a day every day for 50 years, and we are planning for a re build in the summer of 2020.

When we first started milking cows in 1953, we started with 8 stalls and just three Guernsey cows from Highclere estate, Newbury. The vacuum pump was driven by a little electric motor that drove a tiny vacuum pump sat on top of a vacuum reservoir/ tank, and these bits of equipment were mounted on a pair of wheels in wheelbarrow fashion, known as a ’Miracle Milker’ The vacuum pipe was then connected to a large bucket that would take about 5 gallons of milk, with the pulsator being part of a large lid that a had a big rubber seal and was secured in place by the handle of the bucket, that swung up in a radius to keep the lid in place and prevent losing the vacuum. After you had milked a couple of cows you would tip the milk into the milk churn. But you would pour the milk through a great big filter. This was a big round gauze type filter that clipped into metal unit that sat in the top of the churn and strain out any bits of mud/straw that might have found its way into the churn. Milk churns, when I started typically held ten gallons and were calibrated down the side, so that if you only had a part churn you knew what to write on the label. You now have a churn of warm milk, needs to be cooled, so we had another two wheeled gadget called a milk trolley. This had a hook and would latch into one of the handles of the churn and when you pulled the handles back would lift the churn off the ground and you could wheel it around at your leisure. The old dairy was attached to the house at Little Buckholt, about thirty yards away, so each churn, once full would make its way up the concrete path. We might have had to generate our own electricity, but we did have mains water! There was no refrigeration so we just used cold water to cool the milk, via a ‘Blow Major milk cooler’. This device had a pipe connection at the centre of the top, this was connected to the mains water, switched on and the pressure of the water would drive the internal stirrer and the surplus cold water would run down the outside of the metal churn and cool the milk, not perfect but better than nothing! Then the following morning the milk churns were wheeled out on the milk trolley to the front gate of the house to the milk stand. This was a low level platform about two feet of the ground, and you were able to, by using the two handles on the churn use your knee and lift the churn onto the stand by yourself. Ours was made from old railway sleepers nailed together with 6 inch nails. It was then large enough for the driver, whose name was Stan to pull alongside with his old flatbed Commer or ERF. He would stand on the milk stand and take off some empty, washed churns and lift the full churns another 2 feet, onto the lorry and fill the gaps. Nearly every farm in the village had cows in those days, so he only had to drive a mile or two to the next farm a repeat the procedure. The churns were kept in place with chains down the side, but then speed in those days was not an issue. In the spring, and the spring flush, all the lorries would have a rack the would go on top of the churns at the front and you would carry another 20 or so to make sure all the milk was shifted.
To be continued another month.