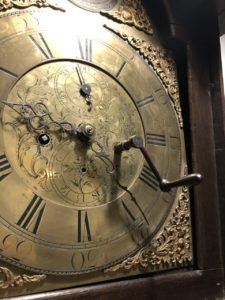 This clock rings in a New Year, made in 1771 by a company in Leeds. From our family’s point of view, I remember it in the sitting room at Alderton Grove Farm, Littleton Drew, north of Chippenham the farm of my Great Aunt Nora and Uncle Jack. It then made it’s way to Little Buckholt Farm, West Tytherley. This Christmas it has made its way to a new home at Bridge Farm, and for anyone who has had experience of Grandfather’s clocks, they will know that getting them to go again is not a piece of cake. However it is going, but needs a bit of fine tuning as is the case with Ed’s re wilding.

So it is nice to hear that Ed Sheeran is taking an interest in the countryside. It is reported that recently he has decided that he is going to re wild his Suffolk estate, and not stopping there, going to re wild as much as the UK as possible!

In the same week we hear from George Eustice, that as part of the re allocation of the Single Farm Payment funds, money is to be allocated to farmers and landowners for their own environmental projects, be it planting a few trees, hedges, ponds etc. and presumably whole re wilding projects. I have no problem with Ed Sheeran re wilding his estate, however it would be a bit ‘Rich’ if Ed starts banging on George’s door for a financial contribution.

Ed will find that the farming community probably don’t need too much advice from talented musicians on how to run the countryside. Just like Ed probably does not need too much advice from a bunch of old farmers on how to arrange his music and getting all the notes in the right order. If Ed has reservations about his carbon foot print, planting a few trees might help, but this is not the way to satisfy his guilt complex.
Far better he looks at his own carbon failings and change them, a bit like the country people are doing.

Musicians entertain the 70 million that live in the UK, farmers feed the same 70 million. As a result the well fed don’t go hungry, and they then have the opportunity and time to listen to great music, played by great musicians. People who have achieved great wealth, have a duty to discharge it responsibly and not lecture and interfere with those around them.