Due to continued demand for our cheese the old 2000lt vat had to go, and has now been replaced by the new vat to the left, 3000lts. Longer and wider with three agitators this will give us another 30% capacity. We are hopelessly over sold on Old Winchester at the moment. The last two weeks have been a bit trial and error, but this week we ought to be in a position to go for a full vat. Inevitably it is going to take a while to have more Old Winchester on the shelf but it will happen, with time. 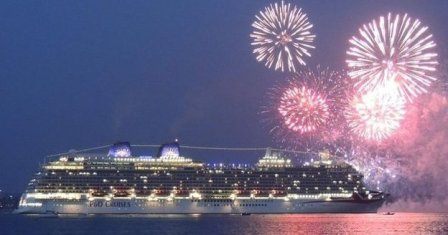 Another big event locally is the maiden voyage of the new P&O ship Britannia. Named by the Queen last week, the Britannia will be based in Southampton and join the rest of the P&O fleet, cruising Europe during the summer months and then off around the world during the winter months. Weighing 141,000, this is a big ship carrying 3,647 passengers with a staff of about 1,500, the sip has been built specifically for the UK market. We have supplied the P&O fleet now for some time, and supply them through Cavendish Ships supplies running out of Fareham. The policy for the new ship is that the Britannia will be using as much UK produce as possible, so you will find Winchester and Stoney Cross on board, and Hampshire Milk supplied via Medina Dairy at Soberton who take the surplus milk that we don’t use for cheese making.