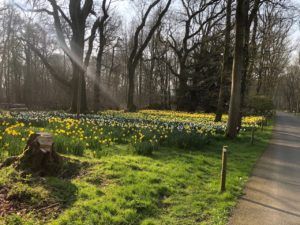 It must be spring at Leckford.

Having just re read what I had written in February, it is incredibly hard to believe that it was only four weeks ago. In the short space of four weeks the world has completely changed in so many respects, as the Ukraine fights for its life, and maybe fights for the life of Eastern Europe. As I write, Russia seems to have fought itself to a standstill, and none of us knows how things will pan out.

Winter is starting to retreat and turn into spring, and in the very near future, the Ukrainian farms will be starting up their tractors, and as the ground thaws out and warms up, there are thousands of acres to be planted with new season crops of wheat, barley and sunflowers. There are however a number of problems. Firstly, thousands of tractor drivers have left their jobs to go and fight on the front lines. Secondly the price of fertiliser has doubled and now tripled, that’s if you can find some. Thirdly fuel supplies are scarce and going to the front lines, and tractors need fuel, we are a long way from the electric tractor, I am afraid. If the tractors are able to roll, in the next few weeks a disaster will be averted.  If the tractors are still in the shed in the next few weeks there will be an impending food disaster for Europe and North Africa, which won’t directly impact on the UK, other than the price of UK wheat will continue to rise along with a sharp rise in cooking oils.

In answer to the customer who was complaining about ongoing price rises of various food items, I said that this is their contribution to the war effort and they need to be thankful they are not stood on the front line with a rifle and little training.

Europe has been sucked into the Russian trap of cheap oil and gas, and Russia has slammed the door shut thinking that Europe has no escape. That might just be a mis-calculation, Russia might have just shot itself in the foot.  If ever the consumer needs to think about home grown food, oil, gas and renewables, its NOW!