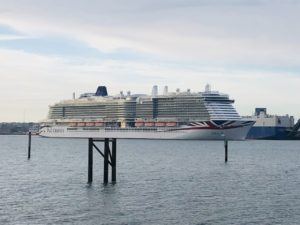 The cruise liners are finding their way back into Southampton after the massive disruption of Covid. All good news for the town and local suppliers, that said there are challenges ahead.

Having discussed milk price last month we had better look at the cost of other foods. It turns out to be an incredibly complicated story, all the different food products are being affected in different ways.

Milk prices are being driven up relentlessly, purely because there is a dire shortage of milk and the market is responding accordingly. Cost of production is going up steeply but we are getting paid for it, however the market is moving up from a very low base, it was too low, that’s why we are short of milk now.
Guilty parties, supermarkets and coffee chains for not paying the proper price for milk in the past.

Cooking oil, is going through the roof, driven up by the shortage of Sunflower oil, due entirely to the war in the Ukraine. The seed is there to be crushed, but getting it crushed and moved to the market is another story altogether. Britain will be able to grow more oil seed rape for rape seed oil, but that could be 18 months away.
Guilty parties, Russia and Belarus.

Wheat, the price having doubled, and given that we grow most of the wheat we need in the UK, we are not short of wheat.  The value of wheat in a loaf of bread is not that great. However, wheat as a cost and proportion of the production of eggs and pork is massive, because it represents a large proportion of the production costs. Pigs have been in serious trouble for some time and egg production is about to hit the buffers. Eggs need a sharp rise in price or there wont be any!
Guilty parties, Russia and subsequently supermarkets who are just not prepared to pay the going rate.

Vegetables, vary subject to product, there are root vegetables in store from a good years production last year, but stocks are not going to last forever, so prices are stable at the moment. However new season vegetables are going to cost more, provided we can get them harvested. Massive shortages of labour have pushed up labour costs, and harvesting the veg is one of the big costs of production.
Guilty parties, Brexit and Covid, subsequently Government.

So you see the cost of food is very complicated, and the news going forward, its not going to change soon. There is one other wild card in the pack, the WEATHER.