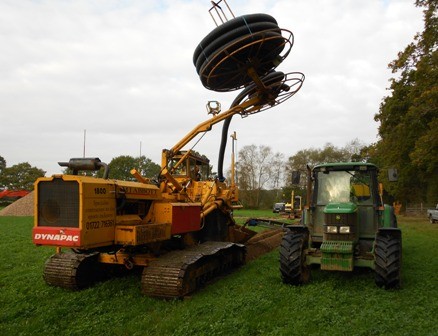 Winter has arrived after the most fantastic autumn, pumpkin all sold, the first frost has just killed off all the flowers in the garden, and now the rain has set in, and there is water everywhere. Just before the rain we decided to get on and land drain one of our bigger fields, 30 acres. Alongside you can see the contractor
Mike Abbott with the machine that lays the pipe and the gravel trailer to the right, pouring in 40mm reject stone on top of the pipe to allow the water to pass easily down to the pipe, 0.9mts down. Now as I speak the drains are discharging millions of gallons of water into the ditch and down the river, instead of running off the surface and taking the soil with it. 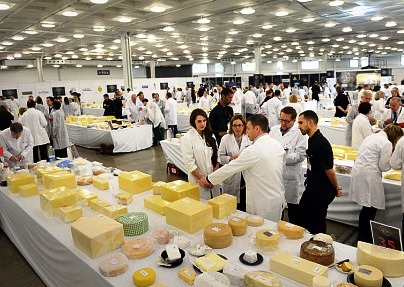 World Cheese Awards held at Olympia this year, they move around a bit, and given the opportunity to judge this year, great experience, always lots to learn, and judges from all over the world to meet. This year a total of 2700 cheeses from every part of the world and for us two prizes and ironically two cheese makers this time, the Old Winchester, Super Gold,made by Paul Thomas, and Stoney Cross, Silver,made by James Brown and all matured and cared for by Jess and Steve, if you don’t get the maturation right, you wont win the prize.

Bath Blue turns out to be the 2014 Champion, they must have had a premanition as they have just built a new creamery, well done Graham and your team.