We have applied for a second Rural Enterprise Scheme Gant, under the Goverment’s ERDP program, and have been successful. This means that phase 3 can now move ahead.

A new cheese vat, the old 700 litre vat now too small, has now been taken out to be replaced by a much larger vat. Similar to the old one but much longer. Only one way in and that is through the side wall, and tipped on its side, weighs about half a ton, so was a bit of a struggle to move it. We have had to shut down for the week or two, the test run with water has gone well, and ready to start agian on the 26th. April. We will probably retain the old vat and put it to good use as a brine tank. 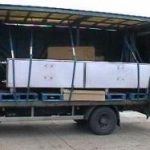 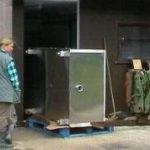