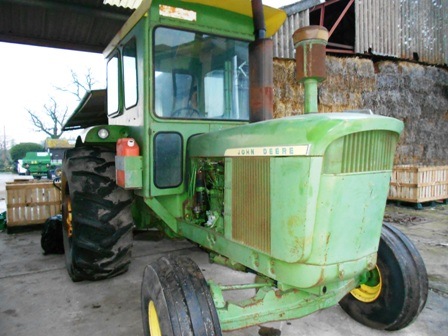 Can’t let the Top Gear crisis pass without a comment. I don’t watch much television, but I do watch Top Gear and the Apprentice. Now that we have lost Top Gear, I can only hope that Alan Sugar, does not thump Nick Hewer, and or get grumpy about his steak, or we will find there is absolutely nothing worth watching on the BBC! What a shambles.

That said, I have not seen Clarkson driving one of these. This is a John Deere 5020. In its day, the late sixties, it was the bees knees. Ahead of its time just like the Ferguson TE 20. In the Seventies we owned a John Deere 4020, the next horsepower down, and always regretted selling it. The opportunity came along a few weeks ago to buy this one, runs beautifully, very heavy though, probably 8 tons plus, as the rear tyres are water ballasted. The tyres are completely shot, so I am looking for a set of part worn 24.5/32 or equivalent. In the course of time we will tidy her up and those that come on an evening tour will probably be towed around by this old girl. Ferrari are no match for this six cylinder, it sounds beautiful Clarkson this is a real motor.About 140hp and 0 to 20 in about 60 seconds.