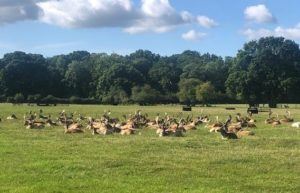 The Fallow deer taking over our countryside.

Now that we have all survived the distraction of a Christmas election, we do now know exactly where we are all going. We are leaving the EU, rightly or wrongly, and the election result made that quite clear, so we have now moved on from what was a very marginal 50/50 situation, that was going to leave 50% of the country very unhappy one way or the other. There is now clear cut mandate for Boris to get on with it come what may, and there is no cause for complaint.

The other election point of interest for us farmers is that by all accounts we are all going tree planting. Dear old Jeremy promised us 2,000,000,000, yes two billion trees, this is such huge number it meant that we had to plant roughly 200 trees every minute for the next twenty years. Presumably no one told him you don’t plant trees in the summer, neither did any tell him he would need an area a little smaller than Wales. That brings me back to my next message, having watched the George Mombiot program last week ‘Apocalypse Cow’, the only point I can probably support him on, is a massive cull of the British deer population. In his instance, he was talking about the Red Deer population of Scotland, in our instance Southern England, the Fallow Deer are totally out of control. This then brings us back to trees, and no one told Jeremy that until someone gets stuck into the deer, they will eat or damage a large percentage of his great idea, they either have to be shot or fenced out, and Jeremy, that could be a big bucket of staples! The deer where we live are worse than rabbits and we have had to fence the whole of Lyburn Farm. So you less ambitious Tory tree planters, need a deer policy first, then think about planting trees.

Moving on from trees, we have just published our evening tour dates for July and they can be found on the tours button on the menu bar above. Sorry we ran out of Stoney Cross over Christmas, we had worked out our numbers but demand was higher than anticipated, but are now back on track.