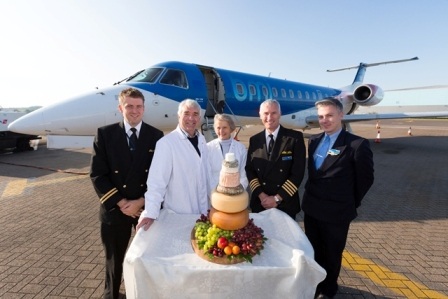 Southampton Airport, in conjunction with its new airline, bmi regional and ourselves, teamed up to help celebrate the Queen’s 90thBirthday in true Hampshire style.
As Her Majesty the Queen is celebrating her 90thBirthday the British Consul in Munich, Germany, wanted to do something extra special to mark the occasion. On a recent trade mission to Munich where stakeholders from Southampton Airport and the local region met their German counterparts, it was decided that a suitable offering for Her Majesty would be a very special seven tier ‘cheese cake’ made with local cheeses.
Each year in Munich prestigious birthday celebrations are held in honour of The Queen hosted by the British Consul for key business leaders and stakeholders, with around 400 people attending. The cheese cake will be flown over to Munich on the new bmi regional route from Southampton and will have pride of place at the British Consul’s celebratory party for The Queen on the 1st June.

We were asked to help, co–ordinate the cheese cake on behalf of cheese makers in the region for an extra special ‘cheese salute’ to Her Majesty on her birthday. The seven tier cake will be made of cheeses, top to bottom, Rosary Goat, Isle White Blue, Tunworth, Francis, Barkham Blue, Old Winchester and Lyburn Smoked.

Jochen Schnadt, Chief Commercial Officer of bmi regional, commented on the initiative, ‘At bmi regional we take great pride in flying our passengers in both comfort and style.  It’s an honour to be working with Southampton Airport in transporting this unusual local gift on our latest new route to Munich.

Dave Lee’s, Managing Director of Southampton Airport, said “We would like to send good wishes to Her Majesty The Queen on this special birthday and hope that the people of Munich will enjoy these award-winning cheeses from our region.”