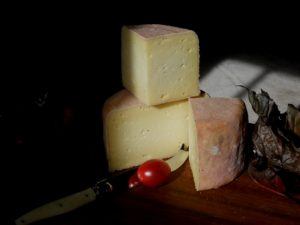 Francis, a washed rind version of Stoney Cross, very pink, same small eyes as Stoney Cross and very pungent. Seen here as a 900grm cheese, but there are 3kg specimens.

Pumpkin crop has proved to be very difficult due to the weather, too wet, too cold, lost a lot of plants in the early stages, so the conversation comes around to the weather, when is it going to stop raining and is this the weather to come for the next 10 years. Lets hope not. It will change back to the norm when it is ready, for those that remember the winter of 1962/3, we had snow from Boxing Day to the end of March, and then the heat of the summer in 1975, followed by even more heat in 1976. We had to go as far as Blackpool to buy hay for the cows in July, there was no food.