This year the British Cheese Awards 2002 have moved to Chipping Campden, a suitable successor to Stow, and a delightful town to visit.

This year we took some selling space and joined in with taste of the South East. Lesley Ward and Sue Scott masterminded the sales drive for six of us cheesemakers from the area. It is a big bonus for the small cheese makers to be included, as some of us just would not have had the time and resources to cope with the full three days. Judy and Lesley in full sales mode.

As far as we were concerned another good result. We have managed to repeat our Silver award for the Garlic and Nettle. Tim has made a few changes to it from last year so it is not exactly the same as it was, and is even more popular at Farmers Markets. 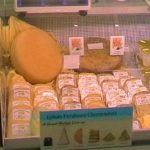